This week March went out like a lamb and April entered with all the glory of Spring. Warm sunshine, trees in blossom and outdoor cafés shutting off the heater lamps and setting up more chairs on the sidewalk. After a long, cold winter all of Paris is ready to celebrate the new season. 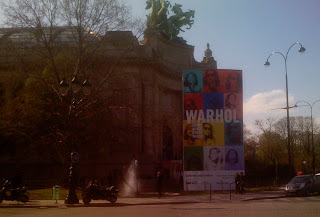 One of the most popular exhibitions on view at the moment is "Le Grand Monde de Andy Warhol" at the Grand Palais. A tribute to the American master of Pop Art, this show focus' on Warhol's portraits both of himself and of his friends and patrons. Beginning with an early oil on canvas entitled "The Lord Gave Me My Face But I Can Pick My Own Nose", 1946, continuing with his silkscreens of celebrities such as Jackie Onassis, Marilyn Monroe, Chairman Mao and the Mona Lisa, and moving on to his experiments with Polaroid photography and video interviews, this show presents a good overview of his work in figurative subjects and is a fun look back at the '70's and '80's and the jet set years.

One interesting aside to this exhibition involves Pierre Bergé, the companion to Yves Saint Laurent who recently auctioned the late couturier's collection at Christie's, Paris (see my blogs of February 20th, 27th and March 15th). The curators of the Warhol show had requested a loan of 4 portraits of Yves Saint Laurent. According to the news media, Mr. Bergé at first agreed, but later refused to lend the portraits if they were to be included in the gallery featuring fashion designers. Rather, he felt that Yves Saint Laurent would be better immortalized in the section on artists. The curators disagreed and unfortunately the portraits were not included in the show at all.

Moving over to the Avenue du President Wilson and the "Galliera" at the Fashion Museum of the City of Paris. Now on view is "Sous l'Empire des crinolines 1852-1870" a look at the fashions of the Second Empire, under the rule of Napoleon III and his wife, the Empress Eugénie. This is a beautiful show and a joy for anyone who enjoys costume dramas on PBS! Three large galleries are filled with gorgeous gowns and all the accessories including shoes, fans, buttons and parasols. I was intrigued by the explanations of what constituted a "ball gown" as opposed to an "evening gown" (lace at the bodice for the former) and the fact that many of the skirts, which were worn over hooped crinolines, had multiple tops so the ensemble could be customized for the occasion. 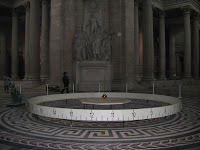 Yesterday's visit to The Pantheon was impressive and informative. Originally designed by the architect Soufflot, under the aegis of Louis XV, as a basilica dedicated to Saint Geneviève, the patron saint of Paris, the building was converted to the national Pantheon in 1791. Today it is a national monument, open to the public 362 days a year. The main floor features murals (marouflé = painted on canvas and affixed to another surface, in this case the wall) by Puvis de Chavannes and other artists depicting scenes of the history of France. In the center of the nave is Foucault's pendulum (right), originally installed in 1851 as a sort of novelty to demonstrate the rotation of the earth. The latest version dates only to 1995 but the fascination for the public is the same.

Downstairs in the crypt one can visit the final resting places of many of France's most important citizens. Interred individually, such as Voltaire, or in small chambers with room for 8 tombs, one is surrounded by the spirits of such luminaries as Alexandre Dumas, Victor Hugo, Louis Braille and Marie & Pierre Curie. Some of the stone coffins are adorned with fresh flowers and amazingly, there are still quite a few empty spots remaining!

Tuesday marked the 120th birthday of the Eiffel Tower! Built for the world's fair in 1889 as a temporary structure to be torn down in 30 years, the Tour Eiffel has survived as France's most famous landmark. Initially despised by the public, it is now hard to imagine Paris without it. Happy Birthday Tour Eiffel! 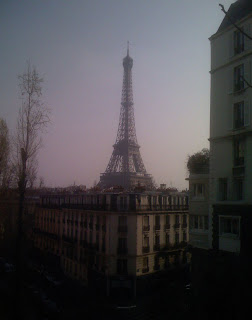 Posted by Georgina Kelman at 3:17 AM