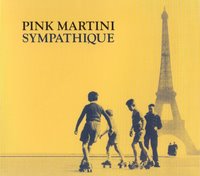 My most recent music discovery is the Oregon-based "Pink Martini", founded in 1994 by Harvard educated pianist Thomas M. Lauderdale. His vision created a "little orchestra" that combines the rhythms of a 1940's dance band with the structure of classical music. The group has a widely diverse following and has toured throughout the US and Europe playing every venue from solo gigs in smoky bars to accompanying symphony orchestras in concert halls.

Their debut album, the self-produced "Sympathique", is a wonderful multi-lingual confection of classics with a distinctive contemporary edge. The star of the album is the title song based on the poem "Hôtel" by Guillaume Apollinaire and sung to perfection by the lead vocalist China Forbes.

Originally a 12 piece ensemble, the band has now grown to 15 pieces plus a full orchestra.

"Hang on Little Tomato", produced in 2004, is a more polished and mature sound. It also expands upon their international base featuring songs in a variety of languages, including Japanese, and dance rhythms from samba to bolero.

This diversity, carefully planned but not stilted, romantic but not mushy, with great musicality and sophistication, makes Pink Martini a group well worth checking out.

Posted by Georgina Kelman at 11:25 AM