If you're looking for a few hours away from shopping and cooking and entertaining this holiday season, I have the perfect suggestion.  Pack up all your cares and woes, even the house guest who's getting on your nerves, and head to the nearest cinema showing this season's must-see hit "La La Land"!

Set in the Los Angeles of today, the movie is an homage to musicals of times past.  It follows the story of Mia, played by Emma Stone, an aspiring actress employed part time as a barista in a coffee shop on a movie lot while running from audition to audition, and Sebastian, played by Ryan Gosling, a jazz pianist forced to play in mediocre cover bands to earn a living while longing to open his own club.

There are several factors that make director Damien Chazelle's take on this love story different from the usual boy-meets-girl, the main element being the location.  Audiences are used to romantic movies taking place in romantic cities like Paris or New York.  Chazelle, a native of Rhode Island, chose Los Angeles for its historic attraction as the land where dreams can come true.  Though Los Angeles cannot be considered "charming", it does have a nostalgic attraction especially for aficionados of old movies.  "La La Land" is shot almost entirely on location using a CinemaScope wide screen format that adds to the film's retro appeal.  Though definitely a contemporary story - Mia drives a Prius and both use cell phones - it has a certain timeless quality as far as costumes and styles.  Add to this mix references to Hollywood classics like "Rebel Without a Cause", "Singin' in the Rain" and "The Umbrellas of Cherbourg" and you have all the makings of movie magic. 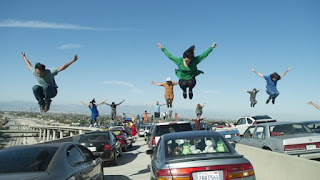 It's popular to lament the dearth of quality entertainment in the movie houses these days, but "La La Land" is like a step back in time, yet refreshingly original.  It is a modern day relationship between two people dedicated to pursuing their dreams and it does not have a story book ending.  Though I couldn't hum a single tune from the soundtrack, I thoroughly enjoyed the song and dance routines from the fabulous opening number shot on a car pool ramp where the 105 and 110 Freeways intersect, to Mia and Sebastian's first duet on a cul de sac overlooking L.A. (below), to the dancing on the Milky Way at the historic Griffith Observatory in "Planetarium". 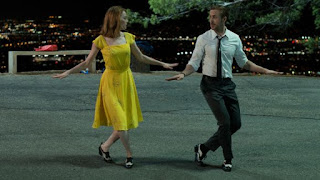 The two hours just flew by and judging from the audience's reaction, we were all sorry to see it end.  "La La Land" has already been nominated for seven Golden Globe Awards and I think it will figure prominently in the Academy Awards as well.  It is a rare gem of a movie - nostalgic and modern, romantic and realistic, dramatic and funny - and ideal entertainment for this holiday season.
Posted by Georgina Kelman at 4:40 PM