The early 20th Century European art scene featured some prototypical "power couples".  Husband and wife duos like Hans Arp and Sophie Taeuber Arp, Wassily Kandinsky and Gabriele Münter, Mikhail Larionov and Natalia Goncharova, were all successful artists both individually and when they worked together with their spouses in collaborative ventures.

One of the most prominent of these artist couples was Robert and Sonia Delaunay who worked alone and together to explore and promote their theories of "Orphism" and "Simultanism" during the early 1900s.  Traditionally, Robert Delaunay has been favored as the more successful of the pair, but Sonia's accomplishments have been receiving much more notice in recent years.  This fall Parisians will have a chance to decide for themselves as each artist is the subject of a major museum retrospective. 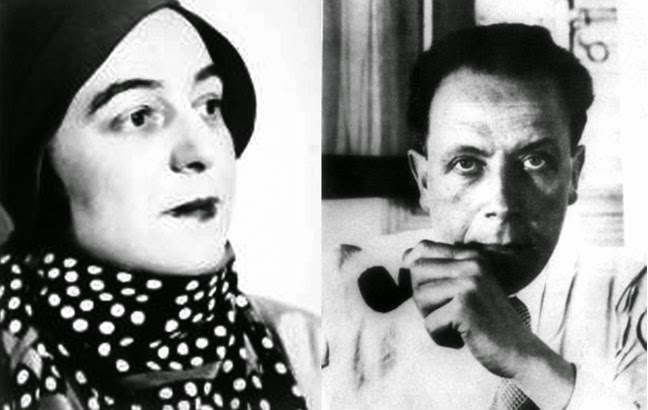 Let's start with Madame and "Sonia Delaunay: The Colours of Abstraction" now on view at the Musée d'Art Moderne de la Ville de Paris.  Born Sarah Stern in the Ukraine in 1885, she was adopted by her wealthy uncle and moved St. Petersburg as a young girl.  Now Sonia Terk, she had both the exposure to culture and financial security to precipitate a move to Paris to study art.  A brief marriage to the Modern Art dealer Wilhelm Uhde propelled her career until she met and fell madly in love with Robert Delaunay.  The first marriage was doomed and Uhde graciously stepped aside to allow Sonia and Robert to marry and form a union that was both an affaire de cœur and a symbiotic meeting of the minds that endured until Robert's death.

The Delaunays combined forces to proclaim a new art based on the dynamic forces of color.  They called it Simultanism and it was a major step on the road to Abstract Art.  Sonia Delaunay was a masterful painter and designer and while her canvases are magnificent, it was the more practical applications of her art that the couple relied on to support themselves and their young son.  She began to explore more lucrative forms of expression such as advertising, fashion, costume and interior design always using her own special Modernist approach to color and form to create objects and decorations that were way ahead of their time. 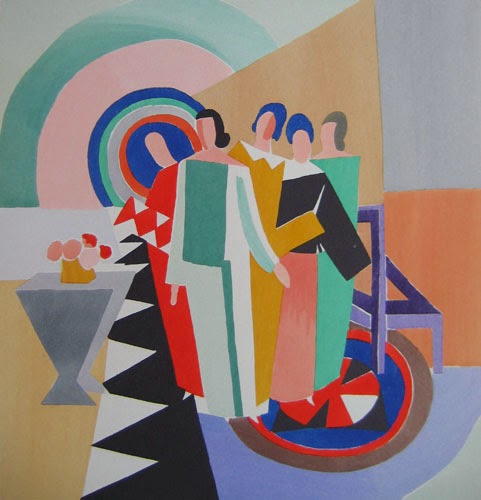 Inspired by the brilliant natural light of Portugal and the newfangled electric lights now illuminating Paris, Sonia Delaunay's bold concentric circles, blocks and zig zags reflected her artistic preoccupations with color, motion, energy and dynamism.  Her clients included actress Gloria Swanson, heiress Nancy Cunard and the Dutch department store Metz who carried a full line of her textiles for clothing and home.  Sonia Delaunay's designs were featured at the 1925 Paris Exhibition - the unofficial birthplace of the Art Déco movement - and her geometric mural panels graced the Railway and Air Transport Pavilions of the 1937 International Exhibition of Modern Industrial and Decorative Arts.  Her artistic collaborations with Dada and Surrealist writers including Blaise Cendrars and Tristan Tzara produced illustrated books that are sought after to this day and her contributions to the ballet and cinema made Simultanism a staple of performing arts. 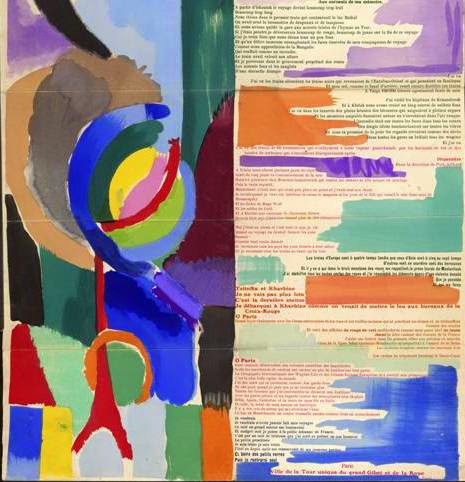 We are not quite finished with our visit to "Sonia Delaunay: The Colour of Abstraction" but I think it is a good time to head over to the Centre Pompidou for the second part of this blog, the exhibition "Robert Delaunay: Rythmes sans fin [Rhythms Without End]".  Robert Delaunay (1885-1941) was a native Parisian who had grown up in the milieu of art and artists.  His fortuitous encounter and subsequent marriage to Sonia Terk literally jump started his career as they worked together to develop Modernist theories of Simultanism and Orphism while she provided the financial stability for Robert to pursue their application on canvas.  Robert Delaunay became a famous painter of "color vibrations" and his works hang in some of the great museums and collections of the world. 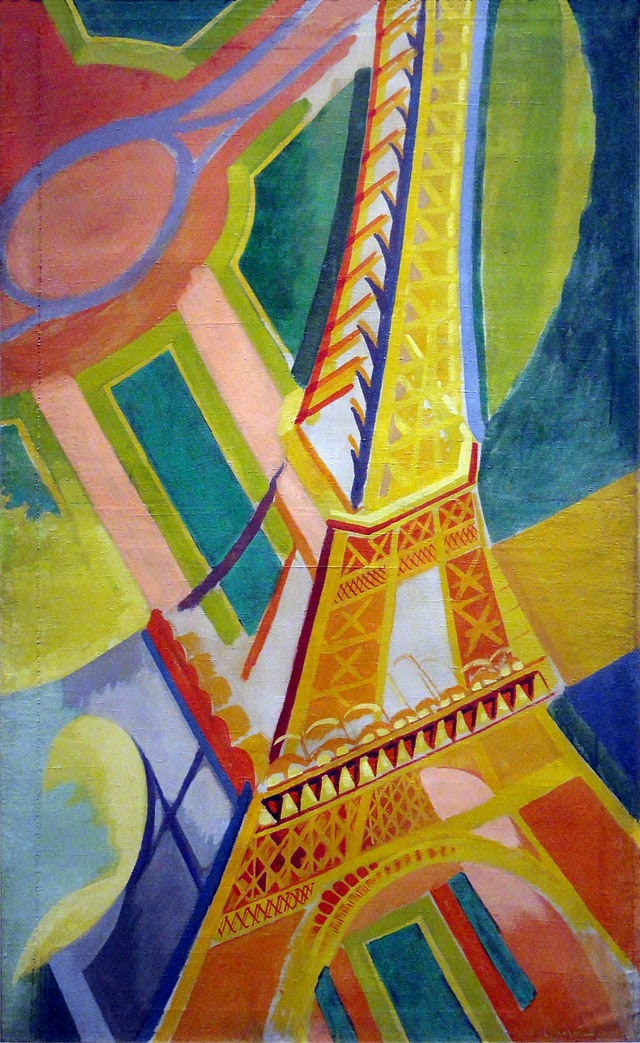 The exhibition now on view at the Centre Pompidou is particularly interesting as it does not portray him simply as a Modernist painter and pioneer of Abstract Art, but includes his forays into the applied arts including theater, architecture and advertising.  From this unique perspective visitors can finally appreciate how the Delaunay marriage was a true partnership, both personally and professionally.  Both were gifted Modernist painters and at the same time both realized the practical and artistic value of the more decorative and performing arts.  To them, art was art. 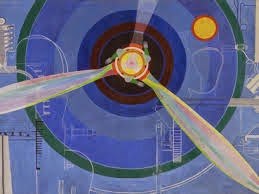 Sonia Delaunay
Close up of Mural for Air Transport Pavilion, 1937

With finances strained by the Great Depression, compounded by the grave danger of being Jewish in Paris during World War II, Sonia and Robert Delaunay left Paris for the South of France.  Sadly, Robert succumbed to cancer and Sonia was left to reinvent her life in a post-war era.  While she began once again to explore painting, primarily in the medium of gouache, she also worked to promote her late husband's work starting with his first retrospective at the Galerie Louis Carré in 1946. 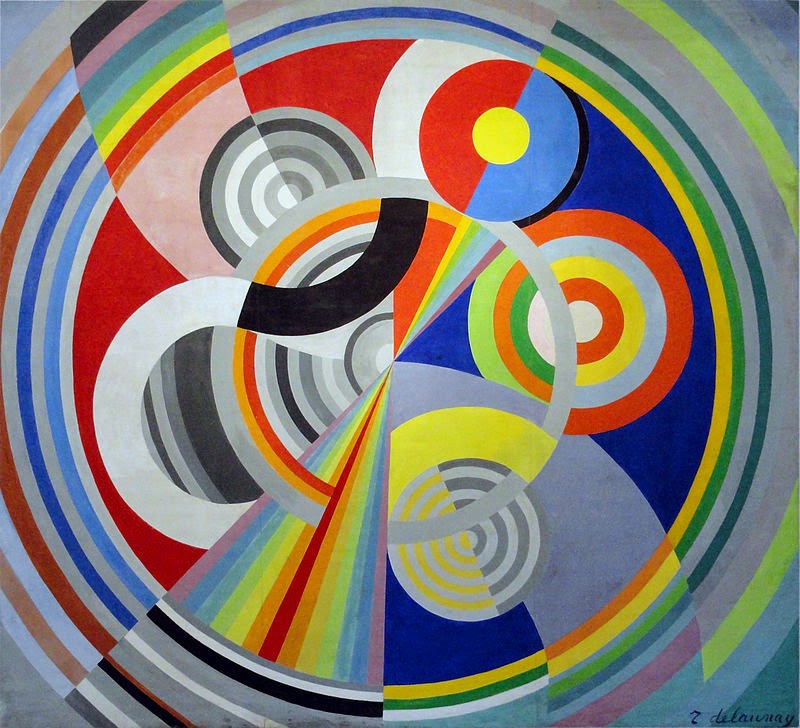 By the time Sonia Delaunay passed away at the age of 92, she had achieved respect for her contribution to theories of Abstraction but was always a bit of a post script to her more famous husband. This attitude has begun to shift in recent years as more and more she is recognized as a true theoretician and practitioner of Modernism.

I have long been a champion of the work of Sonia Delaunay and was thrilled to be able to catch both of these exhibitions while in Paris in October.  And while the show at the Musée d'Art Moderne de la Ville de Paris may have been a little heavy on her achievements in the field of fashion and design
rather than fine arts, it successfully established her as serious and viable artist.  Robert and Sonia Delaunay, both together and separately, were important contributors to Modern Art and their influences can still be felt today.
Posted by Georgina Kelman at 6:24 PM