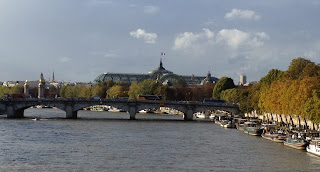 As you can see, we have been blessed with beautiful autumn weather here in Paris!  Perfect for getting out and about and enjoying this season's plethora of exhibitions and events. 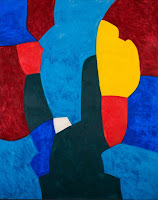 Let's begin at the Musée d'Art Moderne de la Ville de Paris where we find "Serge Poliakoff:  Le Rêve des formes (the dream of forms)".  Serge Poliakoff (1900-1969) was a Russian born abstract painter who came to Paris during the Russian Revolution and stayed until he died.  His work is marked by intense color arranged as a sort of painted collage as he explored the relationships between color, texture, light and form.  His modernist approach made him an idol of the young art scene of the 1960s, and his paintings inspired a dress by Yves Saint Laurent and plates made by the Sèvres porcelain factory, which are also on view!

Moving from Abstract Expressionism to Pop Art, we head to the Centre Pompidou and their retrospective of one of the leaders of the movement, Roy Lichtentstein. You are probably familiar with Lichtenstein's comic book imagery but you may not be aware that in the second half of his career, he used the same Ben-Day dots to reinterpret the modern masters like Picasso, Brancusi and Matisse.

This is the first survey of Roy Lichtenstein's work in France and judging by the crowd waiting to get in, it's been a big hit.  Not surprising really as Lichtenstein's graphics are part of our cultural psyche - easily recognizable subjects presented in a new, Pop, light.

Let's head over to the Grand Palais where we will be staying for a while as there are two major exhibitions in the museum and the Foire internationale d'art contemporain, or FIAC, in the majestic nave.  Part of FIAC is the "hors les murs (outside of the walls)" section which refers to installations of large scale sculptures presented in various outdoor locations - like the Jardins des Tuileries where we find the following works... 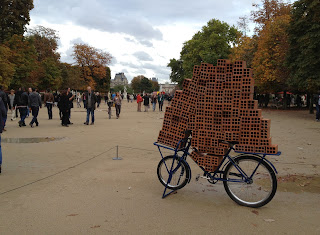 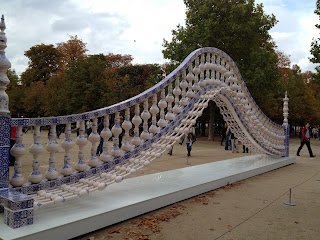 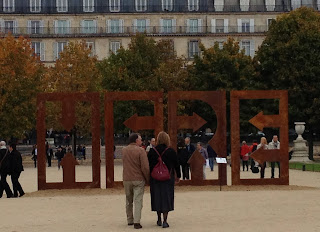 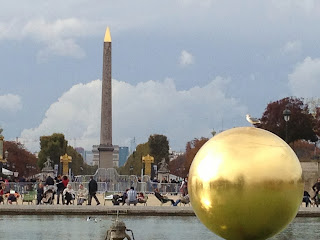 Inside the Grand Palais itself, the 40th edition of FIAC is in full swing.  This year over 180 galleries from 25 countries present the best examples of modern and contemporary art available and there is something for almost every taste. 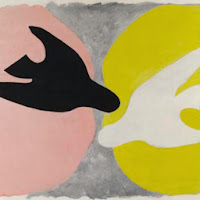 Around the corner from the main nave are the side entrances that lead to the two museum spaces within the Grand Palais.  One exhibition hall is devoted to Georges Braque (1882-1962), a key member of the French modern art movement.

Georges Braque first came on the scene as a Fauve and exhibited six landscapes in the Salon des Indépendents in 1907.  He was a pioneer of the Cubist movement, first removing both form and color and later adding back limited color.  Braque went on to explore collage and finally reverted to the classic themes of still lifes and nudes but with a modernist edge.

I've saved the best for last.  My favorite exhibition and one of the most popular here in Paris this fall is dedicated to the Swiss/French artist Félix Vallotton (1865-1925). 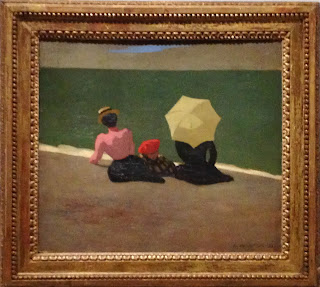 "Félix Vallotton: Fire Beneath the Ice" is a wonderful tribute to one of the least appreciated yet most important artists of the 20th century.  Difficult to categorize, Vallotton's works are deceptively simple in form but immensely complicated in actuality.  A superb draughtsman and colorist, Vallotton could evoke a symphony of moods and tensions in a few, uncomplicated lines. 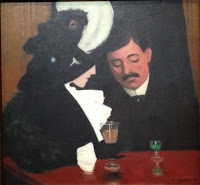 Vallotton was a prolific artist - he completed over 1,700 paintings, 200 prints, 3 novels and 10 plays during his lifetime.  Despite his refined palette and precise contours, his works remain flat and cool, like a spectator rather than a participant.  Despite being married, Vallotton had an odd relationship with women, often portraying them as the instigators of evil but also as the providers of great pleasures.  His imagery is a story in contradictions - secretive and passionate, ironic and sensitive, and aspiring to happiness while delighting in bitterness.

I think we've had enough art for one blog so I will leave you with a funny photo that I took on the way home from dinner one night.  A very clever and creative person had fastened lengths of ribbon to the ventilation grate of the Mabillon Métro stop on the Boulevard Saint Germain.  A crowd had gathered, shrieking in delight as the ribbons shot up into the air.  It was part fun house, part art project and 100% Parisian delight! 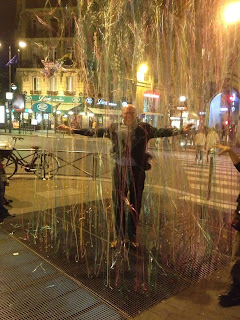 Posted by Georgina Kelman at 5:11 PM

I can never get enough of Paris! Thanks for the glimpse!