"Precision and Splendor" at The Frick

If it seems like just yesterday that we were anticipating summer and in the blink of an eye the days are getting shorter and autumn is around the corner, join the club!  After an unintentionally long break from blogging I thought it appropriate to report on a time-related special exhibition at the wonderful Frick Collection. 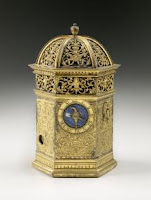 "Precision and Splendor:  Clocks and Watches at the Frick Collection" is a small but elegant display of some of the Frick's most marvelous European timepieces.  With examples dating back to the "beginning of time" (see the gilt-brass table clock by Pierre de Fobis, c. 1530, to the left), the Frick boasts one of the finest private collections in the United States but one that is seldom on public view.

The measurement of time has been a concern since early civilizations attempted to divide the seasons and the phases of the moon into quantifiable segments.  It was the ancient Egyptians who first apportioned the solar year into 360 days, and nights and days into twelve parts.  These were called "temporal" hours as they varied according to the seasons, a discrepancy that was later regulated by Greeks, the Romans and finally the Europeans.

As the population grew it became necessary to develop a method of keeping time that was more unified, reliable and accessible than a sundial or water clock.  By the mid-15th century several European towns had installed "monumental timekeepers" in city halls and churches to standardize public time.  These original clocks were powered by falling weights that moved "easements" but these were later replaced by metal springs that could be wound.  The introduction of springs also allowed the miniaturization of timepieces and the development of more portable pocket watches and eventually wrist watches. 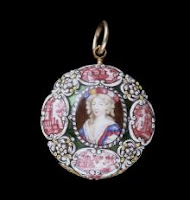 To be sure, a personal clock or watch was a highly prized item available only to the very wealthy who commissioned chronometers as decorative as well as practical objects.  The design of a clock or watch case was an artistic opportunity limited only by the dial and artisans created sumptuous and fanciful examples out of precious metals decorated with gems, painted enamel, repoussé (hammering) and chasing (see the Swiss gold and enamel portrait pendant watch, c. 1660 at right). 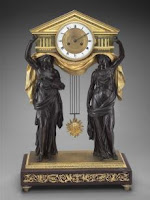 The pendulum clock was invented by the Dutch in 1653 but perfected by the British and French.  This new form offered clock works and case makers a new opportunity to create objects to delight and amuse wealthy clients.  Examples like the pediment clock to the left combined sculpture and time keeping in one beautiful yet practical package.  Here we have two caryatids in black bronze with part of a Greek temple on their shoulders.  The clock dial is in the center of the temple with the head of Apollo at the base of the pendulum.  This amazing piece was made in France by Lenoble circa 1790.

In this digital age it is almost quaint to tell time on a clock or watch with hands and a face.  But what LED displays may have in efficiency, they certainly lack in charm and originality, not to mention fine craftsmanship.  While I cannot offer you an antidote to the ever quickening pace of our lives, I can invite you to step back in time and enjoy these horological masterpieces now on view at The Frick.
Posted by Georgina Kelman at 4:36 PM