As August coasts toward Labor Day and we realize that the "dog days" are behind us, here are two museum exhibitions that focus on light - the element most synonymous with summer.

Let's start at the Guggenheim on Fifth Avenue at 89th Street.  Until September 25, the famous Frank Lloyd Wright designed rotunda has been completely transformed into a captivating sensory encounter that will amaze you.  "Aten Reign" is a site-specific installation created by California artist James Turrell (b. 1943) who is known primarily for his work in the Light and Space Movement.  This is Turrell's first solo exhibition in a New York museum since 1980 and it is a stunner. 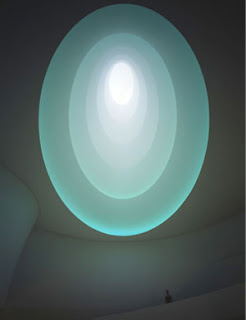 Imagine entering the Guggenheim's normally bright and open atrium and finding it transformed into a elliptical core with bands of color of diminishing intensity rising up to the oculus.  The museum has thoughtfully provided seating around the perimeter and even mats in the middle of the floor so viewers can sit back or lie down and gaze into the enveloping color.  My initial reaction was just to smile at how beautiful it was, but then, as the colors slowly changed, the experience became more contemplative and peaceful. 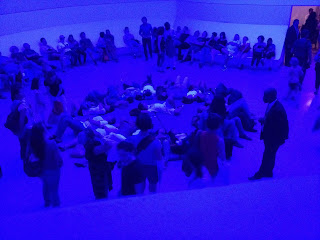 James Turrell uses a combination of natural and LED lighting to create an environment that explores perception, light, color and space and challenges the viewer to be more aware of these elements as tangible substances.  This re-imagination of Wright's iconic architecture was fresh and captivating and, if the queue of people waiting to get in is any indication, hugely successful! 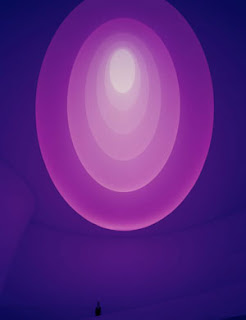 Moving downtown a few blocks to the Whitney Museum of American Art and their revival of Robert Irwin's installation "Scrim veil - Black rectangle - Natural light", last seen at the Whitney in 1977.

A contemporary of James Turrell, Robert Irwin (b. 1928) is another California artist linked with the Light and Space Movement.  Unlike "Aten Reign" at the Guggenheim, this installation is not an homage to color and light, but an almost disturbing distortion of light and space and our perception thereof.  "Scrim veil - Black rectangle - Natural light" was created specifically for the fourth floor of the Whitney Museum and began with Robert Irwin emptying out the entire area and leaving just the architectural elements - the honeycomb cement ceiling, the grey stone floor and the trapezoidal window.  He then encircled the room with a black band of paint, just at eye level, and finally hung a huge white scrim, from end to end down the middle of the room.  The scrim is anchored with a black steel rod at the same level as the painted band.  This steel bar ostensibly serves to hold the fabric taut, but it also acts as an optical illusion giving visitors who step off the elevator into the gallery a feeling of disorientation. 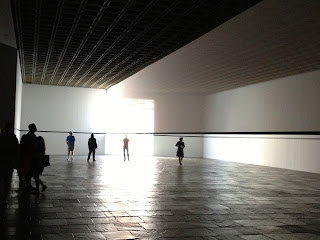 With the deliberate intention of forcing the viewer to "perceive himself perceiving", Robert Irwin's very simple, but very clever alterations add a totally new dimension to the room.  It takes almost a minute to figure out just what the heck is going on - is there really something there?  With the only light source being the large window fronting on Madison Avenue, the mood changes depending on the time of day and the weather, but the impact is always the same. 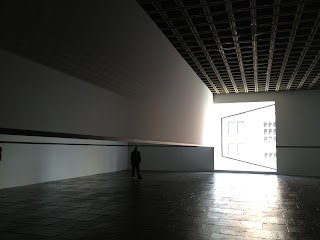 With my personal predilection toward color and movement, I was more fascinated with the James Turrell installation at the Guggenheim than this one, but both exhibitions posed the same valid questions - how much do we really see and how do we perceive what we are looking at?  Provocative topics and interesting to ponder in these two stimulating summer exhibitions!

Posted by Georgina Kelman at 3:54 PM