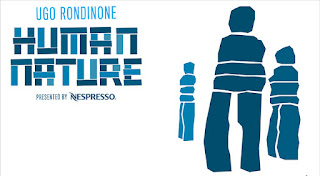 For many of us, the mention of Rockefeller Center conjures a vision of the legendary Christmas tree with ice skaters twirling below its bright lights.  But for a limited time this spring, the very spot where the tree stands will be occupied by giants!  Nine of them in fact, each standing sixteen to twenty feet tall and weighing 30,000 lbs. 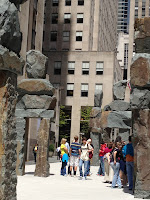 In a long overdue resumption of the Public Art Fund sponsorship of outdoor sculpture to Rockefeller Plaza (halted in 2008 due to the economic downturn), passersby will once again be treated to a free exhibition of monumental work by a contemporary artist.  This year's edition is by Ugo Rondinone, a Swiss artist born in 1964 and now living in New York.  Rondinone is known for his almost whimsical exploration of the themes of fantasy and desire and this installation, entitled "Human Nature", is a perfect example.

Standing in stark contrast to the architectural wonder that is Rockefeller Center, with its famous gilded sculptures of Atlas and Prometheus, these massive stone forms are more like gentle giants than overpowering invaders.  Despite their imposing size and mass, these human forms not at all threatening or nervous making.  Rather, they invite the viewer to walk among them, stand between their mammoth legs and put their hands against the surface of the bluestone rocks that form the figures.  Indeed, these megaliths seem like benevolent stone-age beings who dropped in to the 21st Century and are very much enjoying their stay!

And you will enjoy making their acquaintance, which you will have to do before July 7, 2013 when they will return to wherever mysterious world they arrived from and leave us missing these monumental yet benign beings! 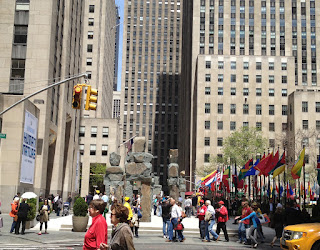 Posted by Georgina Kelman at 5:35 PM