Early June means only one thing in the art world - it's time for Art Basel!  Now in its 43rd year, this grand daddy of modern and contemporary art fairs leaves no doubt that despite its seniority it is still THE fair for serious collectors and dealers of these genres.  Despite an unusually cold and very wet opening day, there were crowds of people and business seemed to be steady, if not explosive.  But I'm not going to linger on the fair and its offerings.  Instead, I'm going to take you on a tour of Basel and what the city's museums presented as special exhibition to lure the fair goers beyond the confines of the Messe. 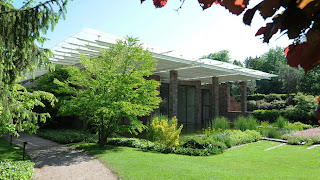 One of my very favorite museums is the Fondation Beyeler, a stunning building designed by Renzo Piano and set amid cow pastures and fields right on the German border.   The Fondation Beyeler's primary purpose is to house and display the very impressive collection of Modern, Contemporary and Primitive art that belonged to the legendary art dealer, Mr. Ernst Beyeler.  In addition to the permanent collection, the museum regularly presents temporary exhibitions that are "must see" shows for Art Basel visitors. 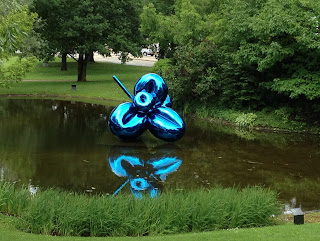 This year the Foundation is presenting the work of the American artist Jeff Koons (b. 1955).  For the first time in Switzerland, Mr. Koons' work is being shown in a well-curated retrospective that focus' on the highlights of his very successful career.  A cross between popular- and high-culture, often bordering on kitsch, Jeff Koons' work is some of the most recognizable in the world of contemporary art.  Some of his more erotic works (not included in this exhibition) and his clichéd imagery (like the ultra famous porcelain statue "Michael Jackson and Bubbles" (on display here) are not my "cup of tea" but I cannot deny his impact on the art world and I think some of his outdoor sculptures are really marvelous (like the "Balloon Flower" installed in a pond on the premises).

A short ride on the Number 6 Tram and I am back in Basel and ready to visit the stately Kunstmuseum.  This year's special exhibition is dedicated to the Impressionist painter Pierre-Auguste Renoir (1841-1919).  "Renoir:  Between Bohemia and Bourgeoisie:  The Early Years" explores the period between the mid 1860s and the late 1870s, a time of extraordinary social, political and artistic developments.  Visitors looking for Renoir's light palette, loose brushwork and charming subjects will be disappointed as this survey focus' entirely on the pre-Impressionist years.  Here he is developing his style with a more subdued and certainly more academic approach.  There are, however, several wonderful landscapes and superb portraits - especially of Lise Tréhot, his mistress during this period! 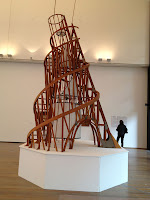 The next stop on the Basel museum tour is the Museum Tinguely.  Located outside of the downtown area, on the banks of the Rhine River, this is a private museum dedicated to the work of the Swiss artist Jean Tinguely (1925-1991) who is most famous for his amazing and bizarre machine sculptures assembled from found objects that twirl and squirt and make funny noises.  This summer, in a perfect compliment to the wild and crazy works of Tinguely, the museum is presenting "Tatlin:  New Works for a New World".  The Russian artist Vladimir Tatlin (1885-1953) was an accomplished painter and stage designer with a very vivid imagination.  This exhibition explores both facets.  His ideas for unrealized projects, such as the 400 meter tall "Monument to the Third International 1919-1920" (see vintage model at right) are efforts to create a utopian society and a new social order.  His "Letatlin" flying machines of the 1920s were intended to re-connect humans to their primordial need to fly - a synthesis of art, technology and paradise.  It should not surprise you that the Dadaists adored Tatlin! 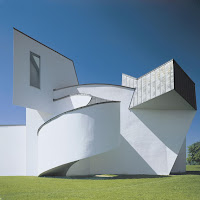 Finally, for the first time I visited the VitraHaus and the Vitra Design Museum campus located just outside of Basel in Weil am Rhein, Germany.  Still a functioning furniture factory, the Vitra Campus is a laboratory for architecture and design.  Although I was not able to go on a tour of the campus, which would have included a geodesic dome by Richard Buckminster Fuller and the Fire Station by Zaha Hadid, I was able to tour the VitraHaus - a collection of twelve "houses" stacked and merged together, by Herzog & de Meuron - which was far out to say the least.  And I also visited one of American architect Frank Gehry's first commissions, the Vitra Design Museum (see left).  A repository for several architects' and designers' estates, the museum also boasts the largest collection of industrial furniture design in the world.  The Vitra Design Museum also presents temporary exhibitions and I was happy to see an excellent retrospective of the work of Dutch 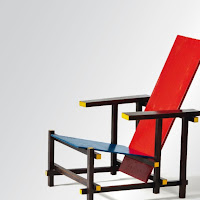 furniture designer Gerrit Rietveld.  "The Revolution of Space" is a look at Rietveld's most iconic works from the "Red-Blue Chair" (see right) to the Rietveld-Schröder House.  His designs for both furniture and buildings were avant-garde in the extreme - masterpieces of simplicity and practicality in the "De Stijl" Modernist movement, and his influence on contemporary design remains profound.

As you can probably tell, I had a great time here in Basel!  But now it's time to take the TGV north to Paris.  I hope you'll check back to see what's new in the City of Light!
Posted by Georgina Kelman at 1:40 PM