Unlike most European cities, Hong Kong does not have a main cathedral or large religious building that sits at the center of the old town.  There are a few brick churches in the Western style including the lovely St John's on Garden Road, an Anglican church built in 1849 to service the British community and still an active parish, but nothing as imposing as say Notre Dame in Paris or St Paul's in London. 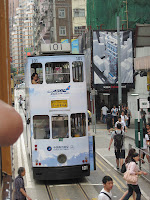 But like so many relics in this mysterious city, a little exploring beyond the obvious will reward the visitor with a glimpse of history and a better idea of how Hong Kong natives really live.  In an effort to get out of the main tourist areas and to see more of the "real" city, I took the tram, or "ding ding" as it is affectionately referred to, all the way to its Shau Kei Wan terminus.  Formerly a fishing village and typhoon shelter, Shau Kei Wan is located on the eastern end of Hong Kong and is home to the Museum of Coastal Defence as well as several old but still functioning temples. 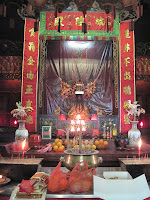 The few remaining temples are quite small in size but well used and open every day from 8-5.  They are not individual parishes, but government run institutions each with a small staff to maintain and run the buildings.  Admission is free and there is incense available for purchase should one wish to appeal to the deities.  Each temple has an altar before which the incense in burned and offerings of oranges, sweets or money can be left.

The first stop on my temple tour was Shing Wong Temple. Built in 1877 as Fook Tak Tsz, it was expanded in the 1970s and is very popular with the local people.  Rows and rows of Buddha-like figures adorn one altar while deeper inside are three altars each with a single deity.

Not far away is Tin Hau Temple built in 1876.  Dedicated to the Goddess of the Sea, this small temple features a pair of stone lions at the entrance and several lovely murals decorate the walls. 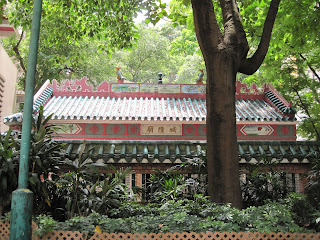 Closer to the water and squeezed between a garage and some run down houses is a tiny but functioning temple - Yuk Wong.  Converted into a temple in the early 20th century, it was originally a shrine built in the mid 19th century by people from Mainland China who worked in a nearby stone quarry.  I did not enter this temple as it felt a little invasive and frankly not that inspiring! 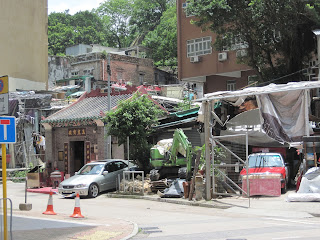 The last temple in Shau Kei Wan is also close to the water and honors one of the few deities known only to Hong Kong.  Tam Kung Temple is over 100 years old and is dedicated to the patron of fishermen.  The large cones you see overhead are incense coils with metal pans to catch the falling ashes. 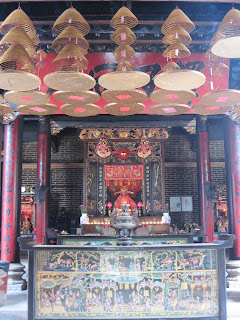 To finish up my Hong Kong temple tour I took the metro back to Western to visit what is believed to be the areas oldest temple - Man Mo.  It is dedicated to the Taoist Gods of literature (Man, who wears green) and of war (Mo, who wears red).  Because of its central location it was visited by not only local residents for worship, but also busloads of tourists looking to learn their fortunes.  Its interior was the most lavish of any I visited as were the offerings to the deities! 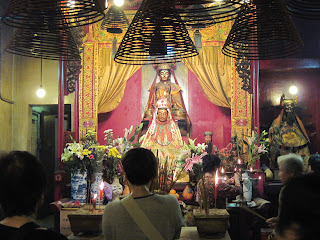 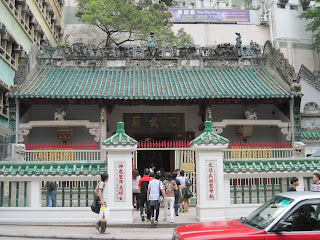 It was now late afternoon and very hot and sticky.  I had covered all of the temples on my list and now it was time to go back to the hotel for a swim in the pool before a dinner of Peking Duck!  Hong Kong is marvelous and I'll be back soon with more!

Posted by Georgina Kelman at 5:46 AM