Two Views of the Nude

It's been a beautiful few days here in Paris - so warm and sunny that the chestnut trees, while not in blossom, are in almost full leaf!

The spring season has also brought forth a slew of new museum shows and I'm going to look at two of them here.  Let's start off at the beautiful Musée d'Orsay, the former train station on the banks of the Seine, and their new exhibition "Degas and the Nude".

In conjunction with the Museum of Fine Arts, Boston, the Musée d'Orsay is presenting an in depth look at Edgar Degas and his artistic evolution in the theme of the nude.  From his early, very academic drawings through his later, very modern interpretations, this show offers a remarkable view of the development of this singular subject.

Hilaire Germain Edgar Degas (1834-1917), along with his contemporaries Edouard Manet and Claude Monet, is considered one of the founders of Impressionism although he himself preferred the term Realist.  Famous for his depictions of ballerinas and race horses, Degas also devoted significant attention to the nude which he explored through a full spectrum of techniques.  The curators have brought together works from every medium - pencil drawings, oil paintings, bronze sculptures, monotype prints and his gorgeous pastels - to give an complete overview of the motif.  Tracing the thematic development from the classical body to brothel scenes to naturalist nudes and finally the late experimental works that were more solid and abstract in feel, we can follow Degas' exploration of this timeless theme as he takes the nude from traditional to avant garde.

"Degas and the Nude" will remain on view in Paris until July 1 and will reopen in Boston for the fall season. 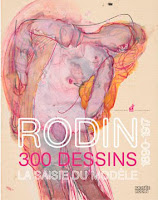 For another perspective on the nude, you just have to walk a short distance to the Musée Rodin to see "Capturing the Model - Rodin 300 Drawings".  Now, while Auguste Rodin (1840-1917) and Edgar Degas were certainly contemporaries, they had completely different styles.  Rodin was primarily a sculptor with "The Thinker" being probably his greatest achievement and one of the most recognized statues in the world.  But during the years 1890 until his death in 1917, Rodin virtually abandoned sculpture and focused almost entirely on drawing.

As the Musée Rodin is currently closed for renovation (it re-opens on April 2), the curators used the down time to promote this less well known facet of Rodin's œuvre.  On display in the welcome center are 300 drawings and watercolors, culled from the museum's archive of over 6,000 works, that epitomize the artist's obsession with drawing the nude.  The exhibition is divided into categories including early naturalistic sketches, cut-out collages of simplified bodies, erotic portrayals that leave nothing to the imagination, a group of Cambodian dancers and avant garde splashes of color that comprise his final works.  Altogether the progression of styles shows Rodin's increased confidence in the medium and his advancement from the classical to the modern.  While 300 drawings of naked women may not be everyone's cup of tea, it was a interesting study in contrasts to the massive bronze sculpture Rodin is famous for and provided a compelling look into the psyche of this giant who ushered in the 20th Century.

I am now heading out to enjoy the glorious sunshine and maybe have lunch at an outdoor café!  But I'll be back soon with more dispatches from the museum scene here in Paris!
Posted by Georgina Kelman at 5:05 AM