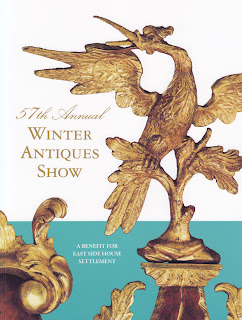 We New Yorkers have already endured more than our fair share of snow and ice this season so the opening of this year's Winter Antiques Show was an especially comforting occasion! Always a ray of sunshine in the dreariest month of the year, the annual extravaganza of the rare and unusual provided a much needed diversion from Mother Nature's latest blow.

So despite the new snow delivered overnight and the forecast record low temperatures for the weekend, it was with great anticipation that I put on my winter boots and coat and walked through Central Park (actually quite beautiful with the sun shining) to the Seventh Regiment Armory on Park Avenue. Instead of the usual enormous bouquets of flowers, this year the foyer was decorated with more appropriate snowflakes - the cloth kind suspended from the ceiling and the light kind illuminated on the floor!

I was clearly not the only one who thought this would be a nice way to spend a Friday afternoon - the show floor was humming with visitors enjoying the elegant atmosphere and extraordinary offerings. From Persian rugs to French wallpaper, from Northwest Coast masks to Tiffany lamps, from exquisite portrait miniatures framed in jewels to medieval suits of armour, there was something for everyone!

It was hard to pick my favorite piece in this year's show but there were several that I found fascinating. Like the Alaskan fossil walrus skull that dated back about 10,000 years and still retained the lower jaw and tusks on the stand of Peter Petrou, London, and priced at $64,000. Continuing in a Northern theme, I loved the luminosity of Albert Bierstadt's painting "Iceberg", 1883, at Alexander Gallery, New York. More whimsical items include a set of eight stuffed frogs by the German toy maker Steiff for $2,800 at Frank & Barbara Pollack, Illinois, a tramp art double-armed lamp for $8,500 at James & Nancy Glazer, Maine, and a pair of rustic Adirondack armchairs fashioned of tree branches, twigs and roots and painted white at Hirschl & Adler, New York.

Throckmorton Fine Art, New York, had a marvelous large metate, or grain-grinding stone, in the shape of a jaguar and composed of volcanic stone. Made in Costa Rica circa 600-900 AD, this particular example was most likely used in a royal household as indicated by the engraved designs on the back and its immaculate condition. Hans P. Kraus Jr., New York, had a mock-up of a 19th Century photography studio on his stand which also featured a rare complete example of "The Cator Album", 1866/77. The open page showed a collage of a watercolor court jester strewing tiny albumen photograph portraits across a landscape. It was absolutely charming. I don't often comment on china and porcelain but Michele Beiny, Inc., New York, had on her stand an 1839 Sèvres chocolate service with its own fitted leather box. This gorgeously painted and gilded set had been presented to the winner of the Emperor's Cup Race in 1853 and could be yours for $110,000.

This year's special loan exhibition was titled "Grandeur Preserved" and featured masterworks from the Historic Charleston Foundation. Carefully selected from the Foundation's substantial collection, the artifacts presented here included peerless examples of furniture, needlework, silver, clocks and other treasures and gave renewed meaning to the idea of "Southern gentility"!

If this never-ending winter is getting you down I have the perfect solution! You have until the end of January to visit the Winter Antiques Show and lose yourself in a world of beauty, refinement and enchantment. Enjoy!
Posted by Georgina Kelman at 10:30 AM