A Visit to the Albright-Knox Art Gallery 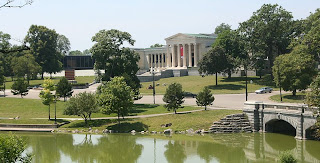 The City of Buffalo, New York, is known for many things - its proximity to Niagara Falls and Canada, its famous "wings", its infamous snow and its heartbreak football team the "Bills". But Buffalo is also home to a superb art museum, The Albright-Knox Art Gallery.
In 1901, through the generosity of Buffalo philanthropist John J. Albright, the Albright Art Gallery was conceived as an adjunct to The Buffalo Fine Arts Society and the intended site of the Fine Arts Pavilion of that year's Pan-American Exposition. Unfortunately, the building was not completed until 1905 - too late for the fair but it quickly became a center for the cultural life of the city. In 1962, thanks to the benevolence of Seymour Knox Jr., the museum was significantly expanded and ultimately re-named. The neo-classical structure is beautifully situated in Delaware Park, part of the Olmstead Park and Parkway System, on swanky Elmwood Avenue.

I have wanted to visit The Albright-Knox for years, ever since I found out that it was home to one of my favorite artist's masterpieces - James Tissot's "L'Ambitieuse / The Political Woman", 1883 (see right). Despite passing through Buffalo many times en route somewhere else, I had never taken the time to stop by. Last Saturday was the day and I looked forward to it more than almost any museum visit I can remember! I got there so early that I had to sit in the parking lot for a half hour before the doors opened to the public! I asked at the front desk where exactly I could find this painting and made a beeline to see it. When I finally stood before it it was almost anti-climactic - yes, the work is magnificent and the finest example of Tissot's considerable skill as a painter I have ever seen, but I was not prepared for the extraordinary examples of 19th and 20th Century art that kept it company. 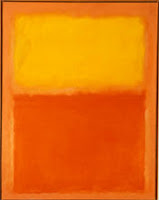 Though the Albright-Knox is not a major museum as far as size, it has an amazing, world-class collection of American and European Modern and Contemporary Art. My jaw dropped as I walked from treasure to treasure of works by some of the most famous artists of the time. Pointillist perfection by Seurat in "Study for Le Chahut", a large Rose Period Picasso painting "La Toilette", a 1912 Futurist gem by Balla "Dynamism of a Dog on a Leash", a 1924 Surrealist Miro "Carnevale of Harlequin", and the epitome of Modernist sculpture, Brancusi's bronze head "Mademoiselle Pogany".
Abstract Expressionism and Pop Art were also well represented with outstanding works by Roy Lichtenstein, Jasper Johns, Ed Ruscha, Jackson Pollock (see below), Mark Rothko (see left) and Andy Warhol. What I found especially impressive was that most of these works had been acquired at the time and donated to the museum, many by its great patron Mr. Knox. The choices reflect a remarkable foresight and appreciation seldom realized until well after the artist in question has already become a commercial success. 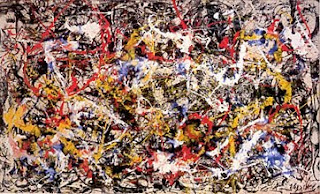 Jackson Pollock "Convergence", 1952
The Albright-Knox Art Gallery also has a strong collection of Contemporary works and mounts temporary exhibitions such as the intriguing "Automatiste Revolution: Montreal 1941-1960" that is currently on view. But, for me, there was nothing that could compare to the drop dead fantastic display of works from Gauguin to Gorky, from Impressionism to Conceptualism, that forms the heart of this jewel of a museum. I had come to see the Tissot and I left with an art experience that was almost intoxicating.
Posted by Georgina Kelman at 3:54 PM