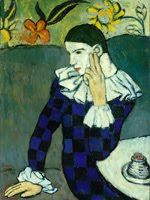 If you have a penchant for Picasso, New York is the place to be this spring! With special exhibitions at The Metropolitan Museum of Art, The Museum of Modern Art, and Marlborough Gallery, the prodigious œuvre of Pablo Picasso is covered from beginning to end!
Let's start with the new exhibition "Picasso in The Metropolitan Museum of Art" which features 300 works drawn exclusively from the museum's own impressive collection. The Met's entire group of 34 paintings, 58 pastels, watercolors and drawings, 2 sculptures and many of their 400 prints are displayed by period, with an emphasis on the artist's early works. 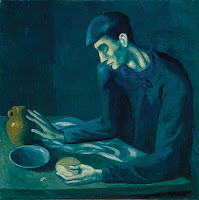 Pablo Ruiz y Picasso was born in Malaga, Spain, in 1881, to a middle class family with an artistic background. His early years were spent between Spain and France where he studied art and associated with groups of Modernist writers, poets and artists. This show begins with several quite beautiful works done in Paris at the turn of the century (see "Seated Harlequin", 1901, oil on canvas, above right) and continues into the melancholic "Blue Period" of 1901-3 (see "The Blind Man's Meal", 1903, oil on canvas, right).
By 1904, Picasso had settled in Paris and his palette became less gloomy and more optimistic. His "Rose Period" of 1904-6 is a reflection of his growing professional success and a fulfilling relationship with a woman, the model Fernande Olivier, and includes many images of circus performers, especially harlequins, and actors.
Art history will confirm that Picasso did not remain true to any one style, or any one woman, for very long and by 1906 he had moved on to Cubism, a period that would span ten years before evolving into Neo-Classicism and Surrealism. Each epoch had a different female companion including his wife, the ballerina Olga Khokhlova, the very young Marie-Thérèse Walter, the photographer Dora Maar, the mother of two of his children and the only woman to actually leave him Françoise Gilot and his second and final wife Jacqueline Roque. Throughout his life and up until his death in 1973, Picasso worked incessantly producing drawing after drawing, canvas after canvas and print after print.
For a look at great works from the artist's mid-career, let's move downtown to The Museum of Modern Art and visit their permanent collection as well as a special exhibition of graphics entitled "Themes and Variations". The MoMA is home to one of Picasso's masterpieces and an icon of Modern Art, the incomparable "Les Demoiselles d'Avignon", 1907 (see left). Influenced by African masks, Iberian sculptures and El Greco's paintings, the discordant image reflects his obsession with the issue of pleasure versus mortality vis-a-vis the dangers of sexually transmitted diseases prevalent at that time. Featuring five prostitutes in a brothel, this painting caused a sensation at the time and continues to draw crowds 100 years after it was created.
The collection at MoMA boasts many Cubist, Surrealist and Modern gems all hanging on the walls of the permanent galleries. But for a limited time, visitors can see the museum's outstanding stock of prints and illustrated books. Organized by theme, the exhibition looks at portraits of lovers and wives, the Saltimbanque series, the Minotaur series, bullfighting, and the prints done "after the Masters". Each example is wonderful but I loved seeing the illustrated books on display in vitrines. As in the Metropolitan Museum of Art show, MoMA has exhibited pages from Picasso/Buffon "Histoire Naturelle", 1942, with its etchings and aquatints of various birds and animals, and examples from his monumental Suite Vollard, conceived and produced in cooperation with his great dealer Ambrose Vollard in 1939.

Finally, for a fabulous survey of the graphic works of Picasso, visit the Marlborough Gallery at 40 West 57th Street to see their exhibition "Celebrating the Muse: Women in Picasso's Prints from 1905-1968". This is a museum quality show in a commercial gallery, complete with a fully illustrated catalogue. On view are over 200 pieces done in a variety of print-making techniques including etching, drypoint, linocut, aquatint and lithography, that explore the theme of women as muse. And we know he liked women! Exquisite examples of his most famous prints, including the haunting "Repas Frugal", 1904/1913 (see left), "La Femme qui pleure", 1937, "La Femme au tambourin", 1937, and "Le Chapeau a fleurs", 1963, are on display as well as a large group of works from his later, very erotic, "347 Suite", 1968. This show runs until May 8 and is well worth a visit.

Pablo Picasso has gone down in history as one of the most prolific and influential artists of the 20th Century, if not all time. The scope and magnitude of his output is astonishing and it is a testament to his genius that two major museums and an important gallery can all mount an exhibition without overlap. From capricious clowns to starving prostitutes, from raging bulls to distorted ex-lovers, Picasso's 70 years of work cannot easily be classified and deserves at least one look.
Posted by Georgina Kelman at 5:41 PM