A Visit to the Château de Malmaison 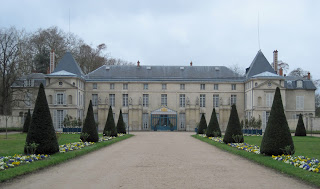 For me, one of the most fascinating women in history is the Empress Josephine, wife of Napoleon Bonaparte. Born Marie-Joseph-Rose de Tascher de la Pagerie on the island of Martinique in 1763, she left her native land for an arranged marriage to Count Alexandre de Beauharnais in Paris in 1779. The couple had two children before the French Revolution broke out and Alexandre was imprisoned and guillotined. Rose, as she was then known, survived the "Terrors" and was introduced to a young General Bonaparte who became fascinated with her and pursued her until she married him in 1796. It was a turbulent time in French history and she stayed by Napoleon's side as he fought campaigns in Europe and Egypt and eventually crowned himself Emperor. The Empress Josephine was a perfect partner in every way but one. She could not provide an heir and after much painful deliberation it was decided that they would divorce so he could marry a younger woman who could give him a son. Josephine retained her title and friendly relations with Napoleon, and lived in quiet comfort until she died of a cold in 1814.

Now, shortly after Napoleon married Josephine, and while he was on his way home from Egypt, she purchased a 17th Century mansion outside of Paris called Malmaison. The house was intended to be a retreat from the whirlwind of Paris yet it also had to be a fully functioning command post for the leader of the Empire. The house and grounds were expanded and improved and decorated in a way to honor the accomplishments of the master. No expense was spared in ordering furniture and decorations befitting the illustrious occupants, and it served as both a home and a headquarters for them as a couple and later as Josephine's residence. 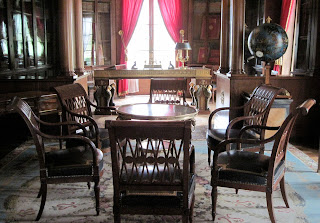 Napoleon's Library at Malmaison
A Sunday afternoon seemed like the perfect time to take the RER, the French suburban commuter railroad, out to Rueil Malmaison for a visit. A short walk through the town and I came to the beginning of the forest and park and soon to the Château itself. Although very unassuming at first glance, especially in comparison to its neighbors Versailles and Fontainebleau, the house is perfectly proportioned and beautifully situated. I walked from room to room amazed by the stunning décor, much of which was done on an Egyptian theme to celebrate the Napoleon's early victories. Much more than at other castles and mansions I have visited, this one truly had the feeling of being a home albeit to rather illustrious residents. I could just as easily imagine Napoleon and his advisors in the Council Chamber (see photo below right) studying maps and planning strategies as I could envision Josephine entertaining a special guest such as Thomas Jefferson or Czar Alexander I of Russia. 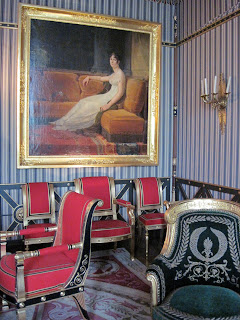 The house was opened to the public in 1906 and has recently been carefully restored using both private philanthropy and government funding. Fortunately many paintings and drawings of the interior were done at the time and still exist so later rennovations and repairs could be historically accurate. The museum is also actively repurchasing items that had been sold off over the years and are now being returned to their original home - a magnificent set of gold and hand painted Sevres porcelain plates being a prize example.

Josephine de Beauharnais Bonaparte rose from being the daughter of a not-so-important nobleman assigned to the French colonies to being Empress of an Empire that spanned Europe. She was an astute diplomat, an important advisor to Napoleon and her favour was sought after by leaders and intellectuals everywhere. Her "Empire" style of fashion and decoration is emulated to this day, her important collection of exotic birds, animals and plants was a major resource for scientific discovery, and her descendants include many of the sitting crowned heads in northern Europe. But the most visible legacy of this important figure is her private retreat and the site of some pivotal political events, the charming Château de Malmaison.
Posted by Georgina Kelman at 12:12 PM