A New Year's Day Walk on The High Line

The first day of 2010 has arrived with mild temperatures and sunny skies! What better way to clear the cobwebs from last night's celebrations than to take advantage of a break in the weather and go exploring in New York's newest park - The High Line. 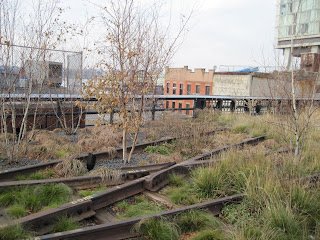 A visit to The High Line has been on my to-do list since it opened to the public in June of 2009 but the idea of battling huge crowds just to go for a walk was a little off-putting. Better to wait until the novelty had worn off and truly enjoy this very special addition to the already marvelous New York City Parks system.

Located on Manhattan's West Side, The High Line began as an elevated railway intended to remove dangerous freight trains from the streets of the city by lifting them 30 feet into the air. From 1930 until 1980 these trains hauled everything from food to manufactured goods from Spring Street to 34th Street. What was unique about this track was that it ran through the center of blocks, rather than above an avenue, and cars could roll right into warehouses and factories in this industrial district. By the 1970's rail freight was being replaced by trucking and in 1980 The High Line was closed. It quickly became an eyesore and neighbors lobbied for total demolition to make way for new construction below. 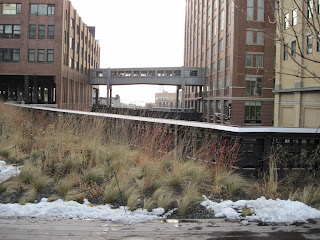 Fortunately their petition was not granted and in 1999 the group "Friends of The High Line" was founded to explore the possibility of re-opening the structure as a public space. Fast forward to April 2006, when, in a remarkable cooperative effort between New York City and private parties, the first railroad tie was hoisted as the official groundbreaking of the new High Line. 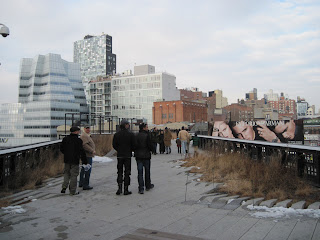 Today one can walk The High Line from Gansevoort Street in the Meatpacking District to 20th Street in West Chelsea with an extension to 30th Street forecast for 2010 and the final stretch to 34th Street anticipated but with no definitive date as of now. Although the railroad tracks are very much in evidence, the natural landscaping and the commodious benches make one almost forget the fact that this was indeed a working railway. Until you look at the base of a wooden lounge chair and realize that it is on iron wheels and can be rolled up and down the track! 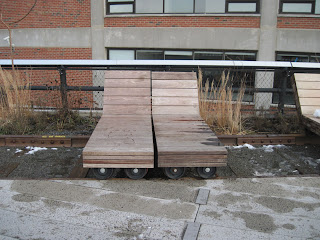 With panoramic views of the Hudson River and New Jersey to the West and Chelsea and Midtown Manhattan to the East, not to mention the strange sensation of walking underneath buildings that straddle the structure, a visit to The High Line is marvelous. Although only a limited section is complete and open to the public, it is enough to make you want to urge the builders to hurry up and finish the next part! It is a testament to the foresight of a few concerned "Friends" that we have this extraordinary new attraction made out of an industrial relic that had fallen into decay. Thank you, and we look forward to the next installment! 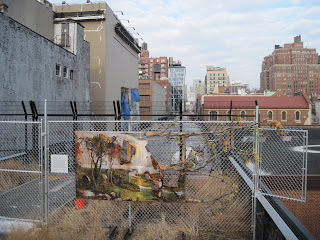 The (present) end of The High Line, looking North

P.S. This is my 200th Blog post and the beginning of my fifth year of sharing art and adventures with my readers. I could never have imagined how much fun and how rewarding it would be! Thank you for your support and encouragement and I wish all of you the very Happiest of New Years!
Posted by Georgina Kelman at 4:36 PM

Well, dear Georgina, your blog keeps me in touch with the parts of New York (and the world) that I love - Happy New Year - Feliz Año Nuevo! Margie