"American Stories" at The Met 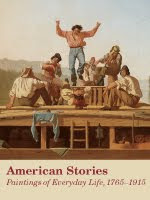 In the 150 years between the American Revolution and World War I, the United States was a country coming of age. Newly independent and in search of its identity these formative years were visually documented by the paintings of what have become some of America's most well-known artists. Copley, Homer, Eakins, Sargent, Chase, Cassatt and a host of others used their brushes and oil paint to express the joys and frustrations experienced by citizens grappling with the important issues of a new government, western expansion, a Civil War, the urbanization of their society, race relations, industrialization and mechanisation and a developing role in on the world stage, while still coping with everyday problems such as family, marriage and community.

A look at these paintings and the tales they tell is now on view at New York's Metropolitan Museum of Art. "American Stories: Paintings of Everyday Life, 1765-1915" presents narrative works depicting colonial life in the home, on the frontier, in commerce and at play.

The show is divided into four main sections. "Inventing American Stories, 1765-1830" chronicles the earliest American paintings at a time when the artist was considered not much more than a tradesman whose job was to render an accurate depiction of the subject. The more creative painters managed to bestow a little magic onto the canvas and evoke a story rather than merely recording facts. For example, a nasty boating accident becomes a dramatic rescue at sea in John Copley's "Watson and the Shark", 1778, and Ralph Earl's 1789 portrait "Elijah Boardman" (see right) transforms a textile merchant into a purveyor of elegance. 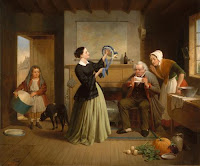 The next galleries focus on "Stories for the Public, 1830-1860". This period marked the emergence of genre paintings as American society craved scenes of lower- and middle-class daily activities that reinforced a glorified vision of themselves. Francis Edmond's scene of domestic bliss "The New Bonnet", 1858 (see left), William Ranney's courageous pioneer family in "Advice on the Prairie", 1853, Richard Woodville's two generations of war heroes in "Old '76 and Young '48", 1849, and Arthur Tait's dramatic "The Life a Hunter", 1856 all evoke the kind of pride and romanticism the patrons desired.

The terrible years of the Civil War and the reconstruction that followed challenged American artists to present healing yet realistic scenes that depicted the political, economic and social changes while soothing a longing for the pre-war innocence. "Stories of War and Reconciliation, 1860-1877" is an almost nostalgic look at children and childhood (Seymour Guy's "Making a Train", 1867) the great outdoors (Thomas Eakins "The Champion Single Sculls", 1871), scenes of domestic tranquility (John Brown's "The Music Lesson", 1870) and the poignant soldier/farmer in Winslow Homer's "The Veteran in a New Field", 1865 (see below). 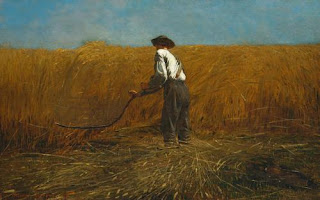 As the United States expanded and grew more prosperous, and as the easing of transatlantic travel opened Europe up to more visitors, Americans and American artists became more sophisticated and more confident in their unique identity. The final section, "Cosmopolitan and Candid Stories, 1877-1915", reflects this new comfort level and is a celebration of the better 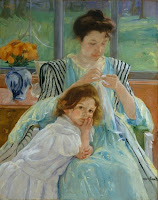 aspects of life in the New World. Images of loving mothers and genteel ladies like Mary Cassatt's "Young Mother Sewing", 1900, Frederic Remington's rugged cowboys in "On the Southern Plains", cultured art patrons enjoying the pictures in Frank Waller's "Interior View of The Metropolitan Museum of Art When in Fourteenth Street", 1881, and the entertainment of George Bellow's "Club Night", 1907, all show a side of America that might have been rosier than reality but projected an ideal that we still consider a "golden era" in American history.

This exhibition is far more than a sentimental look back at the "good old days". It is a historic overview of American painting and painters and a fascinating snapshot of life in this new nation from Colonial times through the Gilded Age. "American Stories: Paintings of Everyday Life" is on view until January 24th.

P.S. I also recommend a quick trip across the hall to see "Watteau, Music, and Theater" a small but amazing presentation of drawings and paintings by Jean-Antoine Watteau (1684-1721) who is considered the early 18th Century's finest and most important artist in all of Europe. With a focus on his depictions of musical and theatrical scenes and supplemented with antique instruments and porcelains from The Met's impressive collection, this show is short but oh so sweet!
Posted by Georgina Kelman at 10:21 AM