What's On in Basel

The annual Art Basel International Art Fair is an occasion for the city's museums to pull out all the stops and organize some blockbuster exhibitions for the visiting aficionados. This year was no exception and I was able to take in several outstanding shows in between visits to the fair. Here's a short survey of some of the highlights. 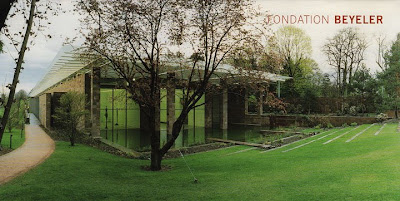 Located a short tram ride from town in the pastoral village of Riehen, on the German border, is the Fondation Beyeler. Housed in a splendid building by Renzo Piano (really one of his best designs) the Fondation showcases the superb modern art collection of Ernst and Hildy Beyeler, and is a venue for memorable temporary exhibitions as well. This year visitors were treated to two excellent shows, "Visual Encounters" and "Giacometti".

"Visual Encounters" is a look at the similarities between primitive art and modern painting and sculpture. Ethnographic works from Africa and Oceania are grouped according to region with a complementary modern work or two displayed as well. For example, Nkisi nail figures from the Congo are alongside two 1911 Cubist paintings, one by Braque and the other by Picasso. Or, colorful, linear Matasor carvings from Papua New Guinea are posed in front of Piet Mondrian's geometric "Picture No. III", 1938.

The idea is not to suggest an influence, trace a history or suggest religious significances, it is purely a juxtaposition of two exceedingly different art forms. The result is stunning and the viewer is free to simply enjoy the diversity and excellence of the works without hunting for hidden meanings.

Recently opened at the Fondation Beyeler is "Giacometti", a first rate exhibition of the work of Swiss artist Alberto Giacometti (1901-1966), considered one of the most influential figures in modern art. Although a major figure on his own, Alberto was deeply influenced by and bound to his family and the exhibition includes pieces by his father, Giovanni, his brother, Diego, and his Uncle Augusto as well.

There have been many retrospectives on Giacometti, including a major show at MoMA, New York, but this exhibition is different. The works presented here have been carefully curated to include only the finest examples of all phases of his career and include paintings, drawings, Diego's furniture and lots of sculpture grouped and presented for maximum impact. A tiny (1 1/2") bronze man on a pedestal ("Small Man on a Base", 1940/1) sits all alone on a massive cube in the center of its own gallery. The result is visually arresting and a very graphic example of Alberto Giacometti's obsession with the cosmos of space and time. Another gallery featured life size bronze figures including "Standing Woman", 1948, "Walking Man", 1947, and, "The Chariot", 1950, posed not under cases or on stands but grouped seemingly randomly on the floor so the visitor could walk among them. I found this installation marvelous and it gave me a new appreciation for the work. 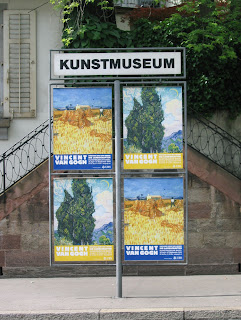 Let's return to the City of Basel and a very special exhibition entitled "Vincent Van Gogh: Zwischen Erde und Himmel (Between Heaven and Earth)" now on at the Kunstmuseum. We are all familiar with the works of Van Gogh, the Dutch painter who gave us "Sunflowers" and "Starry Nights". However, this show focus' exclusively on his landscapes and gives the clearest, most informative overview of his life and artistic development that I have ever seen. From the 360º video introduction that greets visitors in the museum courtyard, to the excellent wall notes (in French, German and English), to the 70 fantastic examples of Van Gogh's paintings from Basel's own collection and borrowed from major museums around the world, this is a terrific show.

The exhibition begins at the beginning with Vincent Van Gogh's (1853-1890) childhood as the oldest of six children born to a Calvinist minister and his wife in Groot Zundert, Holland. It follows his attempts to find a career, finally settling on painting in a very academic style typical of historic Dutch Old Master works. At the urging of his brother Theo, an art dealer, Vincent left Holland for Paris in 1886 and was promptly welcomed by some of the leading French Impressionist painters of the day.

The change in Vincent's style and palette was immediate and dramatic. Painting excursions to the outskirts of Paris where nature and industry met, produced canvas' that were far lighter and freer than anything he had produced until then. But Vincent was a bit of a loner and missed the countryside and in 1888 he quit Paris and its cafés for the peace and quiet of Arles.

In Arles he really opened up and used color and brushstroke with abandon. He began to accept modernization and industrialization, both in his life and his work, and his paintings reflect a new confidence and intensity. He experimented with perspective, moved the horizon up to the top of the canvas and incorporated more figures into the image. Unfortunately, this peaceful time was not to last. It was here in Arles that Vincent self-mutilated his left ear after a quarrel with his friend and colleague Paul Gauguin, and he committed himself to an asylum in Saint Rémy.

Even while hospitalized, Vincent was painting. His love of nature and religion surfaced with renewed passion and he interpreted the landscape within the confines of the institution's grounds with fervor. Intense colors, swirling brushstrokes and copious use of paint typified his new style depicting gnarled cypresses, windy skies and clouds and writhing groves of olive trees.

It was a highly productive time for Van Gogh artistically, but he felt increasingly depressed and removed from the world. After a year in Saint Rémy, he sought treatment from the noted Dr. Gachet in the town of Auvers. Dr. Gachet encouraged painting as a means of therapy and Van Gogh completed an astonishing 75 oils in just 70 days.

Fearing another mental breakdown, increasingly dependent financially and emotionally on his brother Theo, and overcome with a crushing loneliness, the amazingly gifted Vincent Van Gogh shot himself in the head with a revolver on July 27, 1890 and died within two days. Theo died of natural causes just 6 months later and they are buried together in the cemetery at Auvers sur Oise.

Although by no means successful during his life, Vincent Van Gogh's work now hangs in the most prestigious museums and collections in the world and he is credited with influencing the Fauves and pioneering the Expressionist art movement. His paintings have been reproduced in almost every form imaginable, from playing cards to tea cups, reaching an iconic status in the public psyche. Given the global popularity of his imagery it is remarkable that the Kunstmuseum Basel could present his art in such a fresh and original way. It was a thoroughly enjoyable exhibition as the masses of visitors, both Swiss and foreigners, will attest. I would love to be able to see it again, but it's off to Paris and some more adventures to blog about so please check back soon! A bientôt!
Posted by Georgina Kelman at 11:47 AM